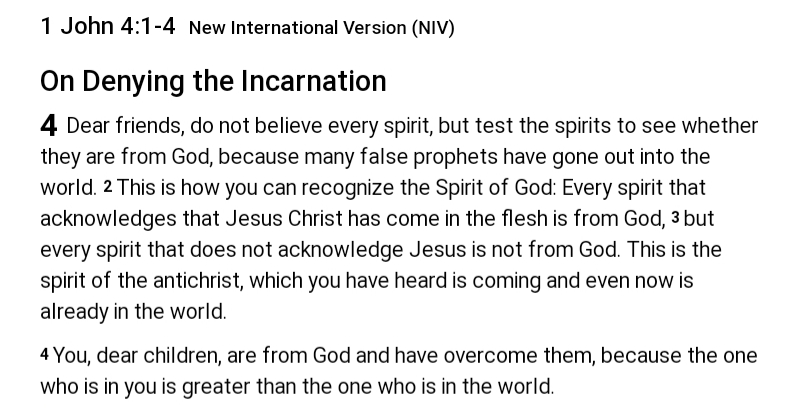 Christian often tell Muslims there is no evidence in the Bible, of the Prophecy of Prophet Muhammed (Pbuh) foretold in the Bible. So in this paper, I will prove to you using (1 John 4:1-4) to prove to the Christian readers that this passage no doubt give evidence of the coming of future Prophets. I shall include Christian responses, and show how these arguements can be countered. So let us begin:

The verse above also tells us, that Prophets will come to you, in the future tense, and so it advises us, how to recognize them. This clearly proves, that the Bible endorsed to accept future Prophets so long as they fit well with the defintion, of how we define who is the truthful spirited Prophet. So what are the criteria that need to be established to determine a truthful prophet.

A Comprehensive Listing of References to Jesus ('Isa) in the Qur'an

Christian will say Muhammed is in the Bible, but only when it refers too”False spirit in 1 john 4:1

Yet all this time, Christians argue the Prophet is never in the Bible? But only when Christians want to prove his a “false Prophet”, he suddenly appears in 1 John 4:1?

Jesus said the one who denies the Son Denies the Father. Therefore Muhammed denies the “Sonship” and “Fathership”. Therefore he denied Jesus to come on flesh.

The term “Son” can be understood in the Bible as “Servent”.

Read: Some translations have “Son ” changed to “Servent”.
http://biblehub.com/acts/3-26.htm

The Quran also affirms this read:

Jesus said, ” indeed, I am the servant of Allah He has given me the Scripture and made me a prophet. (Quran 19:30)

So the term, Son is clearly “metaphorical” because it can mean Servent, just like the term” Father” is also understood being Metaphorical. Because even Apostle Paul claimed to be All our ” Father” read:

Paul said; 15 Even if you had ten thousand guardians in Christ, you do not have many fathers, for in Christ Jesus I became your father through the gospel.

Therefore these terms such as Father and Son, do not mean in the real sense, rather they are more inlined to a metaphorical sense. Thus Prophet Muhammed does not Deny Jesus as a Servent of God nor denie the Father in a Metaphorical sense in the biblical language as the God of this Universe. Jesus in the Bible refers to himself even as the; “The Son of Man”. (Mathew 12:8)

But Jesus is really not Man’s son, His God’s Son right? So how can He be called Son of Man? Well it’s now clear, that terms such as “Son of Man, or Son of God, are all “Metaphorical” Terms.

After all Jesus apparently spoke on, Parables, Metaphors and allegories

I find this one pretty hilarious, a Christian by the name of Tonu writes; 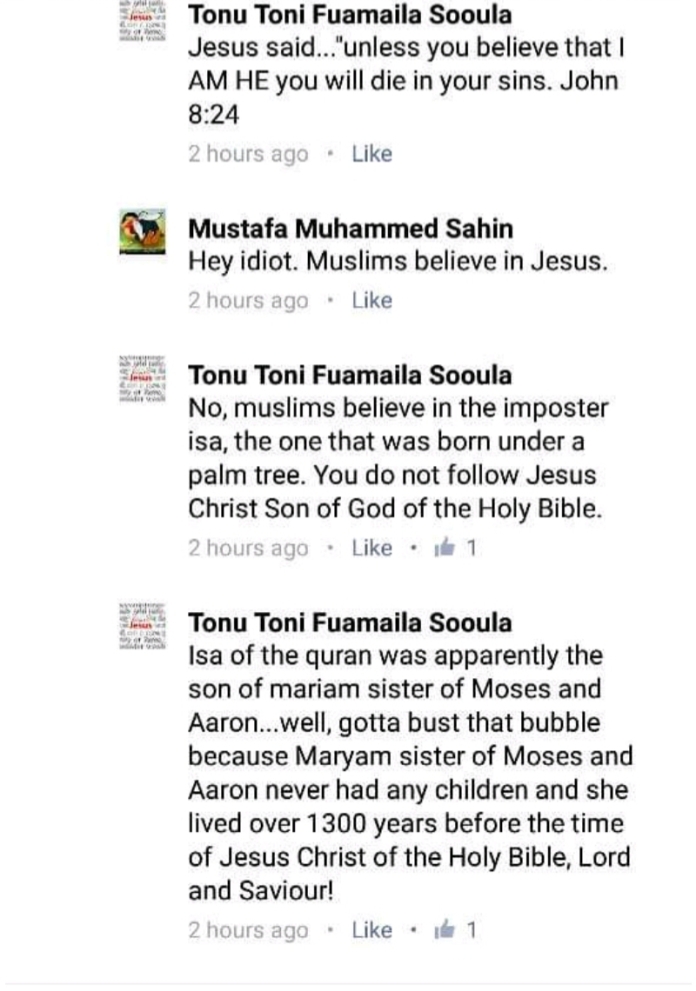 So what does the desperate Christian do, He tries to twist the Quran, to appeal that the Quran is talking about a “different Jesus”.  However this has been clearly refuted here:

Mary, daughter of Amram, sister of Aaron: A Qur’anic error or deliberate allusion?

Now this gets even more interesting, if Christians honestly believe that, the Qur’anic Jesus is a “different Jesus” and not the Jesus of Christianity who was born from a virgin? Then why do “Christians appeal to this Sureh:

Christians say, this is “Evidence” Jesus died on the Cross” according to the Quran. “And the day I die, and day I shall be raised alive”.

Of course, the Islamic position is, this is talking about “Jesus second coming” where He (Jesus) will be sent to the earth a second time, will die a natural death, then rise from the dead.

In any case, Christians still use Sureh 19:33, to prove to Muslims, that the same Jesus of the Bible, who died on the Cross, is the very same Jesus in the Quran in (Sureh 19:33).

So as you can see, we are seeing a huge inconsistency, from Christians like, Tonu. Where He desperately tries to claim, Jesus of the Quran is a different Jesus to the Bible, but then His same Christian folks, try to selectively Qoute certain verses of the Quran to prove the very same Jesus of the Bible!

Christian writes, quoting 1 john 4:1-4 the part where it says; ……… Jesus Christ has come in the flesh is from God,

Both, Mario and Tonu, are suggesting Prophet Muhammeds God, is not the same God of Jesus.

However it gets really, interesting because Christian Apologists like “Christian Prince” tries to even prove “Allah is a Trinity”.

So if Christians like Mario and Tonu want to, prove Allah is a different God, then the one Jesus had in the Bible, why then do other Christian Apologist appeal to the Quran, to prove that Allah is a “Truine God”, just as the Biblical God?

Anyhow, the fact is if we put to the side, the opinionated theological differences, then both the Qur’anic and the Biblical God are the “same God”, thus Prophets Muhammad’s God, and Jesus God is the same God.

So the assertion here is, that if the Prophet Muhammed is a true Prophet and really did confirm Jesus came in the flesh, He the Prophet Muhammed needs to confirm the correct theological belief about Jesus, that being is that the Prophet needs to affirm that Jesus is God. But let me just take you back for a moment, when we look at 1 John 4:1-4.

No where in this “passage does it say, the spirit of truth “The prophet” must confess Jesus has come in the flesh “as God”. Thus this is not the criteria. Rather all the verse says is;

Qoute: “This is how you can recognize the Spirit of God: Every spirit that acknowledges that Jesus Christ has come in the flesh is from God”.

Notice, no where does the verse ever say, He must declare “God is with Us in Jesus”.  Thus its clear, a Christian is forcing a separate criteria to the one mentioned in (1 John 4:1-4).

Anyhow, you can see this article: https://mustafasahin33.wordpress.com/2020/04/30/figurtive-literal-games-in-the-bible/

Prophet, Muhammed (Pbuh) is a sinner? Therefore He, can not be the Truthful Spirit, in 1 John 4:1-4? 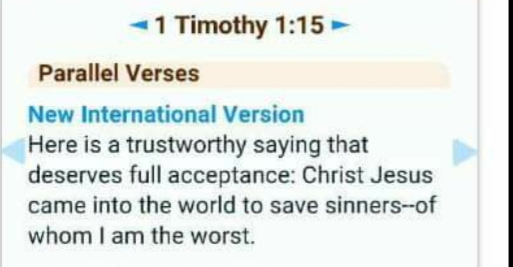 We are told that “Apostle Paul” who admits His the Worst of Sinners, Yet Christians don’t reject Paul, or his letters, now do they? In fact they have no issue in accepting Paul as a Prophet. Also another reminder, the criteria of (1 john 4:1-4) does not say, the spirit of truth (Prophet) must be “Free of Sin”.  So again  a Christian has forced his own criteria to the text. Additionally are Christians really, assuming that the Prophet to come, must be “Sinless”? And yet I thought, that the only one without “Sin” was to be Jesus Christ. So are Christians assuming that there is to come another “sinless being like Jesus?

Jesus is the “only way”

Now even more interesting if Jesus was “The only way” for all times, He wouldn’t be preaching about future Prophets to come now would He? Which He clearly did in (1 John 4:1-4).

Now I have a cross fire section  with the Christian missionary: 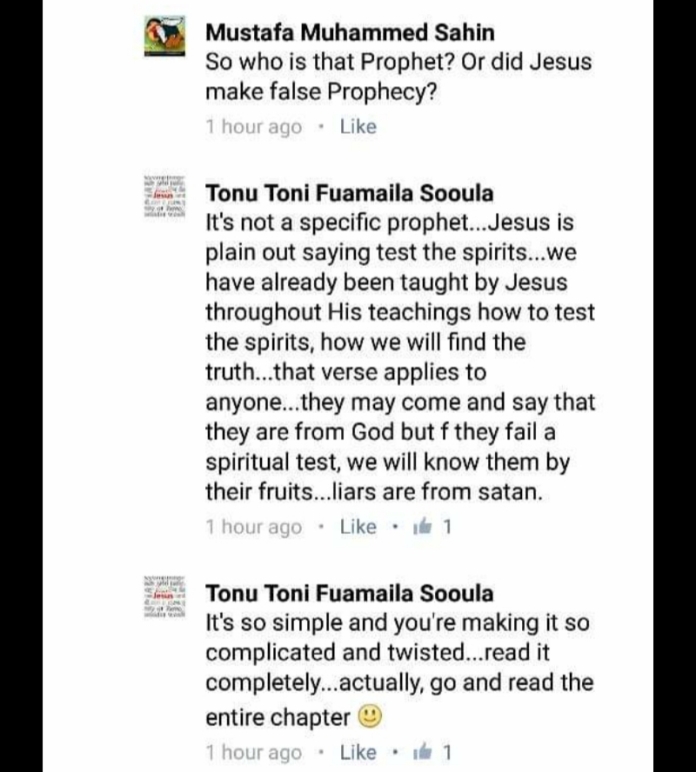 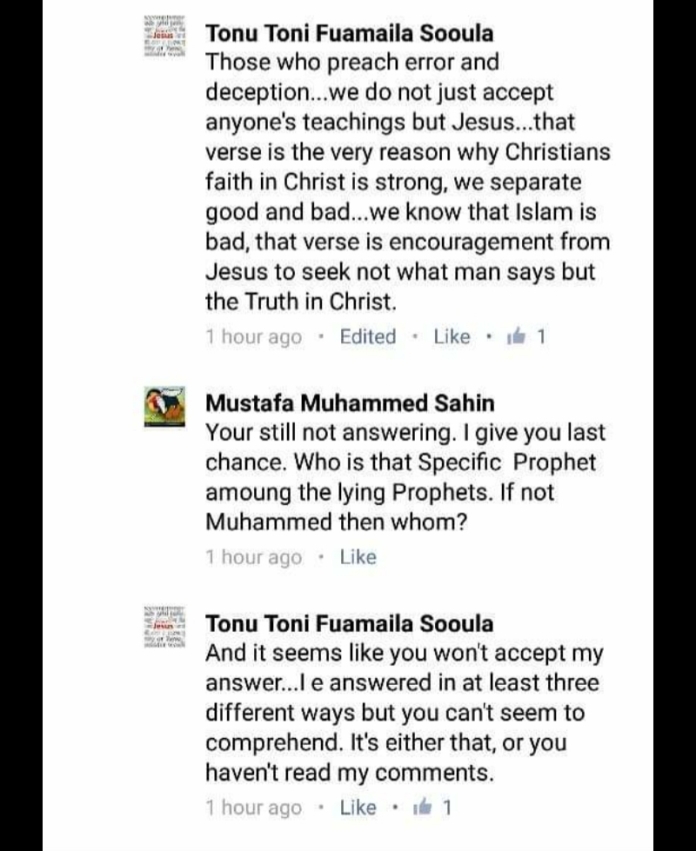 Note: We already answered the claim for “Sinner”.

As you can see the Christian is in denial, and does not wish to list the truthful spirited “foretold Furture Prophets as prophecised in (1 John  4:1-4), and the Christian just wishes to talk about the False ones, so all I could do is get reminded by what Jesus said;

And what the Quran has said;

Allah, (SWT) Has spoken the Truth, they will continue to conceal the “Future Prophets”. Until Allah (SWT) confronts them on the Day of Judgement.

Note: even if a Christian claims Apostle Paul was a Prophet after Jesus, this does not disqualify the Prophet Muhammed (pbuh) because “Testing the Spirits are in the Plural, as the Christian himself admitted, meaning it doesn’t have to refer to one. It could be one, but it doesn’t have to mean only one, according to the Bible, and of course one needs to also reason that, Paul himself never called himself “A Prophet”. Unlike the Prophet Muhammed. See our bellow article,  where we talk about this further in yet another passage of the Bible indicating another Prophecy about Prophet Muhammed (Pbuh) see: